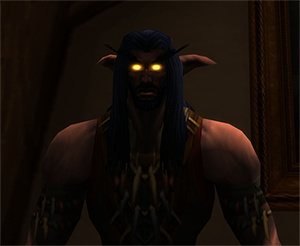 Shortly after the Opening Ceremony held in The Park weeks back, I was contacted by Krondus, a Kaldorei with a burning passion for his race's history. We met, and discussed the past and present of his journeys, touching on the elves' loss of immortality and his newfound community, the Everlook Trading Company.

KRONDUS: Of course, my pleasure.

J: It’s nice to meet another elf. It’s a far journey from Teldrassil, that’s for sure.

K: It is, the trip took many days. The fact that I ran into several… hurdles along the way did not help.

J: [She giggles at him, empathetic to his travels.] What kind of trouble did you encounter on the way to Stormwind? Who or what was your biggest obstacle?

J: The most brutish of the Horde, they are. I would not want to face one, but unfortunately, I had to make the journey the same as you.

K: The dwarves are formidable warriors. I only wish they would protect their lands more. Perhaps the humans and dwarves of this land have gotten a bit too cozy now that the orcish problem is ours to deal with and not theirs.

J: What suggestions would you give them for reinforcing their infrastructure to make it safer for adventurers?

K: Searching out the remaining orcish strongholds in the region and securing the roads for safe travel would be a good start!

J: [She nods in agreement.]

K: Perhaps Teldrassil should send a band of Sentinels here. That would clean things right up, I imagine.

J: I agree wholeheartedly with your sentiment. Perhaps they will see your suggestion in the paper and take heed to it. I do think that other races must step in with their forces in order to cull the threat. After all, the Alliance is a union.

Have you encountered any Horde aside from the orcs guarding passage to Stormwind?

K: Several bands of trolls seem to have been making their way into the Wetlands as well. Fortunately for us all, they aren’t quite the warriors that Orcs are. And I’m glad to say that I have not encountered any of those undead things that plague these lands as well.

J: That’s true, the orcs are unmatched in their strength and are, quite frankly, the most serious threat the Alliance have. The undead are another story. Do you sympathize with them for their lack of eternal peace?

K: Not in the least. Many forget, up until very recently, the Kaldorei were eternal as well. Eternity is a gift, not a curse. One that I hope the elves reclaim soon.

The “Forsaken”, as they call themselves, are fully capable of living meaningful lives, protecting what they love, and fighting for what they believe in.

J: I wish to touch on Nozdormu’s decision shortly, but I would like to ask one more question regarding the Forsaken. Is it fair to compare their eternal life to what was the Kaldorei’s, being that they have sacrificed their lives as humans?

K: Blaming others’ perception of them and using it as an excuse to shift the blame from the Forsaken’s actions looks like an act of cowardice to me.

Regret, frustration, anger, rage, remorse… One can feel these emotions and harbor them while still feeling joy, conviction, happiness, and living a life of love and earnest.

J: I am meant to stay neutral as a journalist, but I could not agree more. Our kind have given much, and continue to give, for past events.

K: Though I’ll admit I find them foul creatures, I do hope they learn to deal with their eternity and their remorse as the Kaldorei have. I think that would be best for all the people of Azeroth.

J: That is very respectable of you to say. As you were saying before, the Kaldorei lost their eternal life. Do you resent Nozdormu for his decision not to bless Teldrassil?

K: I do. The elves sacrificed much recently to protect this world. If anything, I feel like we have earned it more with the recent war than we did thousands of years ago during the War of the Ancients.

Perhaps it is presumptuous of me, and I don’t intend to insult the great race of dragons, but I find it odd he was so willing to reward us when his kin were involved, and far less inclined to do so when the dragons were not as at risk as before.

Shan’do Staghelm works tirelessly to restore our people to greatness. I have faith he will find the answer soon. And, in time, hopefully Nozdormu will come to change his mind. [He smirks at his unintended pun.]

J: How do you respond to those who accuse us of greed for wishing to regain our eternal life?

K: In the interest of keeping our bonds with the other races of Azeroth close, I will not comment on that. But I will say Archimonde and the Burning Legion have been pushed out of Azeroth twice, by the blood of our people. I hope our sacrifice can be appreciated.

J: Understandable, Krondus. I sometimes wonder if the lack of recognition for the Kaldorei’s sacrifices has been lost with time.

K: [He looks at the dark green, fel-colored scar on his arm.] Perhaps some of those memories are best left forgotten.

J: [She eyes his wound somberly.] Although our wounds are deep, time and companionship can help keep our focus from them. Have you found companionship during your journey?

K: Indeed I have. For a while I had my brother. After losing him I was devastated. But in time, I recovered and I have made several friends among the Everlook Trading Company based out of Winterspring.

J: [Her ears perk at the mention of Winterspring.] The Everlook Trading Company - I’ve heard of them! What is their mission? I was born in Winterspring.

K: After the lands in northern Kalimdor were ravaged from the last war, the Kaldorei needed a way to keep their outposts supplied and manned throughout the lands. The goblins were interested in purchasing land and establishing an outpost of their own.

Teldrassil brokered a deal that the goblins will front the cost of maintaining an outpost in the region, under the condition that they remain friendly to Alliance supply caravans in the area and protect them from Horde attacks. Goblins get their outpost in the region, and we get to use it as well. It’s a mutually beneficial relationship for both parties.

[He leans in to Jansither’s ear and mumbles.] It’s also a way to keep tabs on the goblins and ensure they don’t side with the Horde in a critical region of Kaldorei territory.

J: Are you not concerned by the goblins? Though business is second nature to them, I hear concerns regarding their… How do you say it, loyalty and trustworthiness.

K: Of course I am. The goblins do not so much as take a sip of ale in Winterspring without our knowing of it. They know they’re under scrutiny, and they’ve accepted that.

Goblins are brace, but not so brave as to betray the Kaldorei on their own lands. Many forces are stationed nearby at all times should anything go… amiss.

J: Very well, then. I am glad there are precautions taken for security. As an outsider, it’s great to get input from those involved with these operations. I knew of the Everlook Trading Company, but I did not know of their operations. Perhaps you will find more people interested in joining the company.

Unfortunately, I have another appointment relatively soon in Stormwind. We will have to end our interview momentarily. Is there anything you wanted to tell the citizens of Azeroth?

K: Together the Alliance can prevail over any threat.

J: Thank you again, Krondus, for taking the time to speak with me. This was a very lucrative interview, and I admire your passion. You have fire in your heart.

K: Thank you for taking the time to interview me. I wish you safe travels.

[They bow to each other, and Jansither nods at him.]