On Monday night, the Coalition of Gnomes (C.O.G.) made a circuit around Ironforge spreading awareness of Gnomish rights. They rallied in Tinkertown before setting off to stage a sit-in at the auction house steps. A small crowd of people watched onwards as their leader, Killerwatts, produced highly racially charged rhetoric. An excerpt from his speech has been included below. 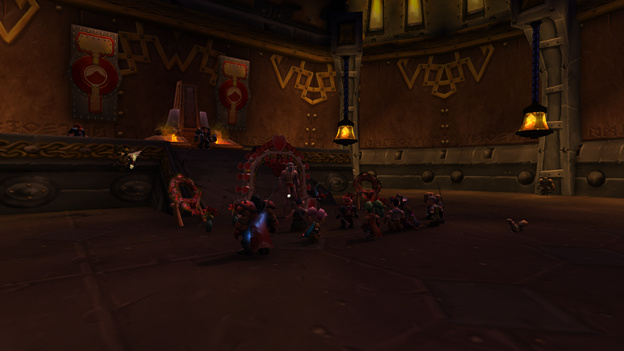 (Pictured above: the demonstration presents their case to King Magni)

“I am Gnome, strong and proud. We are not little folks that use toys. We are spell-casters, we are engineering, we are weapon masters, we are escape artists. WE ARE GNOMES! And don't you dare mess with us. GNOME POWER!”

The gnomish rally eventually made way to the throne room to present their demands to King Magni, though their terms fell on deaf ears. Taking the tram to Stormwind, the protestors followed a similar route through the city. While occupying the auction house, I managed to have a few words with Killerwatts.

“We the gnomes have had it with the unfair treatment of gnomes. Being treated as babies and animals. The C.O.G (coalition of gnomes), we demand gnome respect. We want the Alliance to retake Gnomeregan; no more punt jokes; and every tavern should have chairs that fits to our sizes.”

Public opinion of gnomes has been on the downturn in recent months. Studies have reported that a whopping 64% of jokes told by Alliance citizens feature gnomes as the butt-end of the joke. It remains to be seen whether these demonstrations can sway the minds and hearts of Azeroth to reduce this statistic.