What does a Pillar of Community look like? For this resident of Stormwind it looks like House Blackstone. For half a year or more Thursday night's tavern nights with House Blackstone have been a cornerstone of Stormwind's night life. Well that specific event might be coming to a close with recent news of turmoil within the guild that defined this weekly tradition for some time. 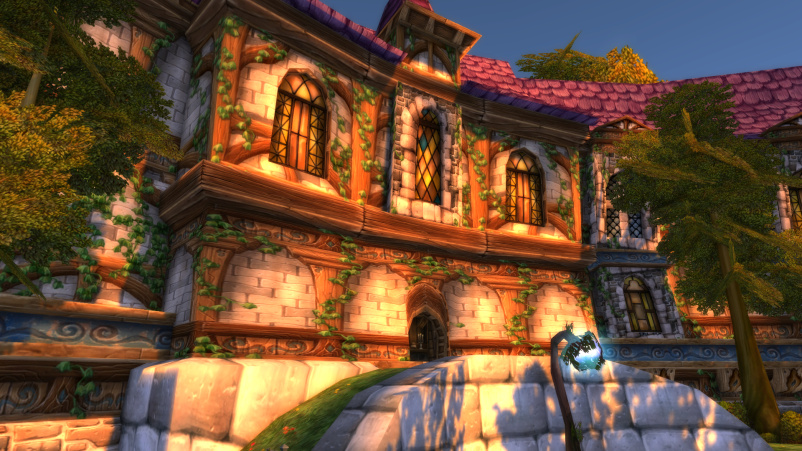 But what is House Blackstone, and what caused the seemingly sudden strife that ultimately led to many of its key members leaving? I've had the pleasure of not only attending many of these weekly events, but knowing many of its fine members. I've even temporarily helped out on rare occasion! I'd like to think I know them well. One person I do not know well is the enigmatic leader of House Blackstone, one Dutchess Eowynn Blackstone.

To hear it from an outside observer, you would say that House Blackstone is a conscientious, kind, and generous guild. They rarely accept payments for their services, and seemingly manage to run their tavern on their own funds. Security is often provided by hired services rather than their own members, though they are not afraid to get their hands dirty if a patron got out of line or caused a disturbance. It was at these very events that Stormwind's warlock epidemic was first revealed, and such security services had to tangle with the likes of summoned demons!

But what of the inside view? Well, I've had the opportunity to inquire as to that very issue. In the interests of protecting my informants, and their reputations, I shall at this point choose to keep their names anonymous. With that said, what kind of group could organize such things? To hear it from them, Duchess Eowynn largely coordinated everything. Indeed, she demanded to be a part of any official discussion of any guild business. Some would call her a micro-manager. The funds they operated from were acquired largely from an external adventuring career, one few were aware of.

Duchess Eowynn herself showed a great deal of desire to be hands on, in control of as much as possible. She could be seen during her tavern nights flitting about from conversation to conversation. She was always tending to some business or another, making deals and connections. Indeed, she may be one of the most well-connected people in all of Stormwind!

But connections, they have to be maintained. Worse, letting connections with your own guildmates break down while you maintain those external connections caused the guild to start sagging under its own weight. Duchess Eowynn's interests started to shift. The guild meetings she insisted on attending simply didn't happen when she stopped attending them. Before long, guildmates were running the tavern without guidance. Cracks were starting to show.

And what was this distraction? What could have diverted the attention of someone seemingly so dedicated? Were there debts amounting? Were there legal issues with contracts? You may have gotten the impression from before, but Eowynn has an inherent need to be in control. Running a tavern once a week was starting to not be enough for her. Indeed, the adventuring career that had funded the guild's efforts had put her in contact with still more adventurers.

As an organizer type, someone who could be depended upon for such things, she found kindred among other adventurers. While House Blackstone's members were happy to enjoy their socializing and community building, Eowynn had been consumed with interest in the Alliance's various wars. Things she could control. Life and death matters. Moreover she was good at them!

Commitments to these external affairs consumed her time and interest. These were no longer mere adventures, but campaigns! And like many affairs, the relationships of before began to suffer. The vacuum of leadership was felt keenly within House Blackstone. Indeed, when she stopped attending her own tavern nights it put the writing on the walls.

And so, my dear readers, as we've seen with so many guilds founded in the last half year, people drifted apart. With their focus lost, their leadership vanished, and their own personal interests taking priority, members of House Blackstone started leaving. Few would blame them, I think. Some would not even blame Duchess Eowynn. Surely her activities are doing good for the Alliance, if not all of Azeroth, but the sacrifice for that was a little weekly tavern, and the guild that ran it.

And so we find House Blackstone, a shell of its former self. Will it ever rise again into its former glories in Stormwind's social life? Will others take over in hosting such events as The Obsidian Sun Company? I have received comment from Duchess Eowynn herself that House Blackstone's Tavern Nights will be continuing uninterrupted. She is acquiring new staff to replace the lost, and apparently security may soon be arranged by the Obsidian Sun Company, a direct competitor! Could this be the beginning of a takeover?

Only time will tell. Time is, well and truly, the enemy in the end. There's never enough of it, and some have far more things than others that consume it. I think Duchess Eowynn could be forgiven for making her choices. Hopefully the foes she manages to fell are many, and her customers are able to take solace in that. Perhaps this will be a new beginning rather than a fading into obscurity.

A tavern might not seem like a grand thing to some. It may seem frivolous, pointless even. To we who know these gatherings, though, we knew them as a place to let our hair down. Azeroth is a dangerous place, and few can escape all of those dangers. We are able to relax, enjoy ourselves, and even be vulnerable there. There is a lot of value in that. It keeps the dark and dangers of the world from closing in too tightly. The cheerful music, good drinks, and better company keeps the nightmares away.

That's what I'll choose to remember House Blackstone for if this is the end. The good times they were critical for providing, not the drama surrounding their troubles. If this does turn out to be the end, may we see their like again.