The Alliance has proven itself to be a beast that is slow to be roused from slumber. Its combined forces are vast and its industries are without equal, but there are many mouths to feed and palms to grease where any considerable dispatch of its forces are concerned. For many long years Stormwind has busied itself, questionably, with agendas and projects that run contrary to its own interests - a matter of contention that perhaps makes more sense with the revelation of what evil forces were at work in the realm's court. Stormwind's true interests have been neglected. The integrity of the nation, after hard decades of reconstruction and resettlement, came into question.

Now, perhaps, we see a spark of hope. Eyes open, teeth bared, the Lion of the South brought marshalled forces across the Thandol Span and into the Arathi Highlands. Their aim? To put a definite end to the incursions the Horde had for a long while made with impunity against the beleaguered locals. The long unanswered pleas of the people of the Highlands, and their representatives in Stormwind, known as the League of Arathor, have, at the least, been given some sort of recognition. 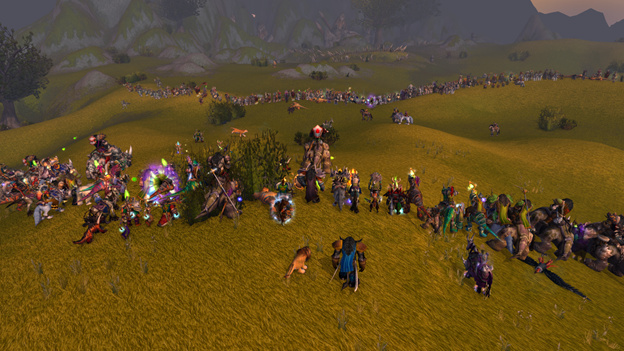 Battle lines are drawn in the Arathi Highlands

I could wax on to the point of tedium about the challenges that face the people of the north, but I will not. There is enough suffering in this world, and it is known to us already, so let us take this moment to celebrate what was a victory for the Alliance. We can not presume that this will bring an end to the Horde's predations, but we can see it as a promising new start to our joint efforts against them. If we might win here, we might win elsewhere, and achieve that elusive dream of peace.

The combined forces of the Alliance came through various channels from the south, particularly from the active ports in the Wetlands and southern Arathi, and took up quarters in the fallen Fortress-City of Stromgarde, where they were accommodated by the realm's master: Prince Galen Trollbane. Enemies of the Kingdom remain entrenched there, though that wasn't the goal of this expedition. Such an effort as liberating the entirety of Stromgarde would have required far more than was at the Expedition Commanders' disposal.

Their goal, rather, was an encroachment of Horde forces from beyond Thoradin's Wall. A combined force from the Undercity and across the sea that meant to ensure the security of those who still took refuge in the former internment camp of Hammerfall and seek any targets of opportunity. That, of course, could include everything from the members of the Syndicate in the region, to ogres, to good citizens of the Alliance.

To let more such evils take root in the Highlands, the cradle of mankind, was not something that could be allowed, especially given the beginning of the accursed operations of Varimathras' Defilers. A dangerous precedent was already being set, and their aggression needed to be check in a language they could understand.

No time was wasted on either side. As soon as outriders and scouts became aware of each other's presence, both forces drew up into battle lines, though it quickly became apparent to the Horde that they were outnumbered. They hadn't been expecting a full detachment from Stormwind. Their hopes, indeed, were for easy pickings of the sort they had become accustomed to. That did not make them cowards though. Not on this day. They formed battle lines against the much larger Alliance contingent and prepared to make a stand on higher ground.

The Alliance wasted no time, they advanced, and with their superior numbers they were able to envelop the left flank of the horde forces. Losses were sustained, they were pushed back, and the Alliance forces pressed on. Blood was spilled on both sides, but it was a foregone conclusion by virtue of numbers alone. All that could be done was fight with dignity and try to withdraw in good order. Humbling losses were inflicted upon them, but the Horde was able to withdraw and, remarkably, regroup as a cohesive unit.

The Alliance expedition, meanwhile, assumed the battle done with and departed for their quarters in Stromgarde City. This would prove to be naive, as they were being followed by Horde scouts and pathfinders, sent by leadership that was honorbound to see something salvaged from their first defeat. With an enemy force that was so visible, and slower than their own, they devised a new strategy.

What came next was a true spectacle, and speaks to the cunning and tenacity of our foes. The Horde contingent's leadership selected their best; hand-picked killers and reavers who could be counted upon. This small team, bloodied but undeterred, utterly fixated on revenge, was sent to the crumbling southern walls of Stromgarde, an area beyond the grasp of Stromgarde's own garrison.

Their plan was to strike at the Alliance Expedition's leadership from an angle they wouldn't expect, while what remained of the main body of their force would work to distract the Alliance forces and keep them tied down. Neither would be a difficult task in that city at war, where each street belonged to a different host.

So began a bloody raid. The Alliance was bogged down in brutal streetfighting with the Horde forces they had thought thoroughly beaten. The Horde's warriors bought time for their raiders by using the streets and buildings to their advantage. It was a fight that was moreso on their terms than the first, and this quickly became apparent to the soldiers of the Alliance, but not quickly enough. The Horde's best had scaled the walls and found their targets. They took what lives they could, cutting down key officers from both Stormwind and Stromgarde while their allies threw themselves into their diversion.

It was not a battle without cost. The Horde would feel the sting of these lost warriors, but they had made something of the affair. Alliance blood, from the top, had been spilled. They made it known that they would not simply leave, and not just roll over at the first sign of organized opposition.

This was a valuable lesson for both forces, wasn't it? We must simply hope the Alliance learns more, and that this new proactive approach to combating the Horde is maintained, for all our sakes. For the dream of peace.