As the conflicts rage across the continents, as noble soldiers abroad fight to safeguard our way of life from the masses of the Horde, as mercenaries and diplomats and tradesmen all do their part towards the ongoing battlefronts, we here at home forget at times to take a moment and think on the many groups working towards the common good of our Alliance. So has this piece begun; a look, each week, at one of the organizations unsung in their efforts. And where better to start than at the heart of the Alliance, and the Stormwind Guard. 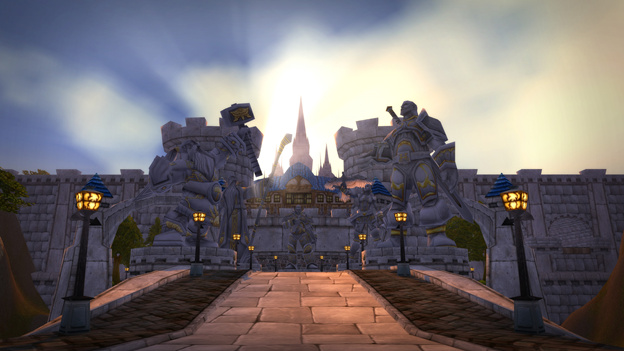 While the men and women of the Capital are as varied in their services as background, a new infantry company headed by Guardsman Marcus ------ was reached out to. In the wake of so much of Stormwind’s standing military forces being deployed to reinforce garrisons and combat the Horde, volunteers like Marcus and his forces have become pivotal to maintaining order in the Alliance holdings and Capital itself. When asked about the burdens of their new role, the sentiment seemed cautious, but ultimately optimistic.

“We have a lot of work ahead of us.” Remarked the newly-promoted company commander. “For too long have the streets of Stormwind been ruled by thuggery and vigilante justice. Our first task is reminding these individuals that, war or no, law and order still rule here.” City Councilwoman Salem was unavailable for comment, but was seen publicly endorsing the newest Guardsman company after their successful presence at the Night Market, thanking Guardsman Marcus for his contributions to event security.

“We’re always in need of volunteers.” Said Marcus in closing. “Those with military background or combat experience are most in demand, but any able-bodied citizen willing to step up for the Glory of the Alliance and her provinces should report to the Command Center. Guardsman Arlorn will be waiting to take your applications.” The citizens of Stormwind and the Grobbulus Times salute the brave members of the guard working tirelessly to keep us safe, and look forward to their continued, and increased, presence.