The Stranglethorn Fishing Extravaganza took place this past Sunday afternoon, prompting hundreds of would-be champions to take to the shores of that jungle peninsula with rod in hand. The competition itself was to be the first angler to catch 40 Tastyfish, a difficult feat to accomplish on a good day. The draw of the title of Master Angler and the tackle awarded alongside made many brave the jungle heat to provide fierce competition. A solo fisherman fared no chance, for they had to compete against aggressive wildlife, cutthroat competitors, and bloodthirsty horde. Several factions rose up during the tournament, then, aiming to increase the chances of seeing the trophy brought home for their guild’s name. Using spotters to scout for pools of spawning Tastyfish and bodyguards to ensure their ward faced no threat, each guild’s angler patiently waited for the fish to bite, a strange juxtaposition to the bloodshed often just down the beach. 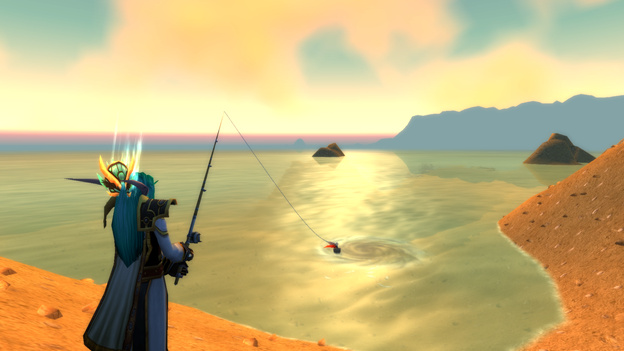 Always a close competition, the race to return to Booty Bay with the day’s catch hand is perhaps the most exhilarating part, as several parties near the finish all at once. The priestess Avyndriel Glimmermoon of the Goldshire Inn Staff managed to claim the inaugural title, under the careful ward of the Staff’s finest. Her stalwart demeanor in the face of such competition saw the day’s victory and awarded her the title of Master Angler. This past week’s victor, however, saw scandal, as claims of collusion between Horde and Alliance have since circulated.

Besmirched as the trophy may now be, the Fishing Extravaganza remains a fun outing and break from the tedium of Stormwind politics.