Late last week, a joint operation between the Stormwind Justicars and the City Guard saw the estate of House Sentinel occupied and searched. This peaceful raid, led by Guardsman Marcus and Justicar Bigsby, was the result of citizen reports following the kidnapping of Stormwind resident Elwynri Goldmane two days prior. Last seen with House Sentinel member Astris Hale, the presence of blood and fel magic at the sight of Elwynri’s disappearance prompted the City Council to dispatch both forces to investigate. 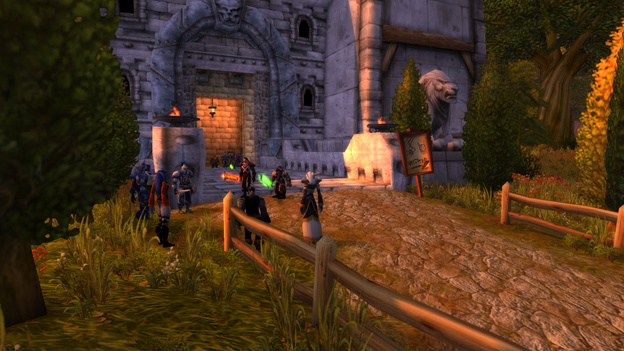 A crowd gathers outside Sentinel Manor as the raid is ongoing

After several hours of search and interrogation, Justicar and Guardsman forces vacated the property to instead dispatch soldiers to Nethergarde Keep. Only after their return was it revealed that Tira Phalandrin, Paladin of the Silver Hand, had been keeping the missing Stormwind citizen in her custody for unrevealed reasoning. Though House Sentinel has purportedly been cleared of all wrong-doing, Justicar Bigsby Wallace spoke with our reporters as to the nature of his investigation into the charges of kidnapping and felcraft.

“Though Astris Hale was an accessory to this crime, she was not its main perpetrator.” Stated Bigsby as he was questioned while delivering written report to City Council. “I have recommended that Tira Phalandrin’s position with the Silver Hand be examined and, if possible, revoked. She has proven repeatedly her lack of interest in lawful process, in upholding the tenants of the light, and in distancing herself from the corrupting influences of shadow and fel magics.” This latest charge of kidnapping and unlawful imprisonment is just the most recent in a long series of allegations against the Paladin, following in the wake of rumors of involvement with an unchained Succubi and the use of fel.

When asked for a quote, City Councilwoman Salem Dizzlespark, who has taken charge of the official proceedings, had this to say: “The kidnapping of Elwynri Goldmane, a lawful citizen of Stormwind, by Lt. Commander Tira Phalandrin is not only unacceptable from a leader of the Silver Hand, but a disgrace to those who look to them as beacons of the Light. This egregious example of vigilante justice will not go unnoticed or unpunished by the Council.” She later went on to praise the efforts of the Stormwind Guard, and to commend House Sentinel for their cooperation with the official investigation. Paladin Tira Phalandrin has been placed under guard within Stormwind, pending the decision of the City Council.