This past Wednesday evening, just as the sun was setting over the savanna, Northwatch Hold’s outer towers came under attack. These assaults were surgical strikes orchestrated by a group of Forsaken infiltrators known as the Hand of Lordaeron, seemingly meant to cripple the garrison for future acts of Horde hostility and aggression despite the growing threat in Silithus. Cleanly and carefully carried out, these attacks left an unknown number of valiant Alliance guardsmen dead, and at least ten injured. However, the Obsidian Sun Company, in cooperation with other mercenary forces, had received intelligence that an attack in force may have been forthcoming, and dispatched reinforcements to the Hold in time to rally the defenders and beat back the attacking Forsaken. 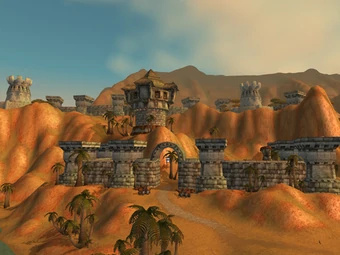 “We were expecting a large-scale siege,” States Obsidian Sun board member Wilhelm Stark. “But perhaps [the Horde] were smart enough to know they would lose in a fair fight, resorting to these underhanded tactics instead.” While it is certain losses were inflicted on the Forsaken attackers, it is believed those injured or killed were carried off by their allies in the retreat, as Northwatch Hold reports no prisoners taken or bodies recovered following the skirmish. Inventories and archives at the Hold are currently being reviewed and counted, to ensure nothing was lost or stolen by the Hand of Lordaeron in their assault. No further details have been released to the public at this time, but the Garrison Watch Commander thanked the involvement of the mercenary forces and assured our reporters that order would quickly be restored, and watch doubled at this critical Alliance foothold in Kalimdor.