Once again, seats have opened in Stormwind City and hopeful applicants are filling in from all walks of life to put their names forth as elected representatives of the six districts. The Stormwind City Council, primarily an advisory and oversight body for the Crown, is a group of officials not appointed by Nobility, but elected to office by the people to give citizens a voice in this time of uncertainty and war. Some months ago, Councillor Salem and Councillor Niehr were elected to the Trade and Park districts, respectively. Seats have now been made available for the remaining four districts: Cathedral, Old Town, Mage and Dwarven. And with such a surge of interest from the population, it is clear many feel the need for such a body of officials remains even after dismissed claims of corruption which plagued the last election period. 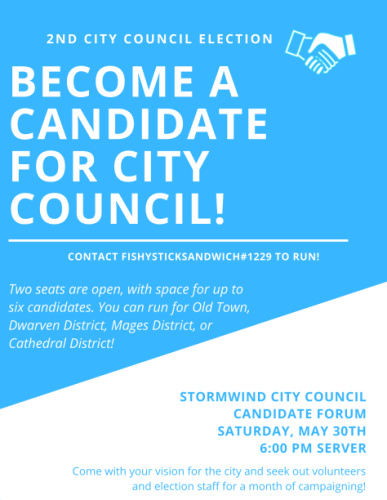 Old Town and the Mage District seem to be the most hotly contended districts this time around, with the conditions of the impoverished and war-orphaned in the Old Town gutters drawing particular criticism. Meanwhile, many are calling for more restrictions and greater taxing of the Mages and practitioners within the Mage District, one of the wealthier sections of the city, and cite dangerous experiments done without oversight as serious sources of concern for the average citizen. Applicants interested in submitting their names as candidates are directed to the Town Hall offices, and the first Candidate Forum to answer citizen questions and raise awareness of platforms will occur May the 30th at the same location. Following which, a near month-long campaigning period will be held across the city. The Grobbulus Times will be on the scene covering this election in detail, and keeping you up to date as the names of those in leading positions are revealed.