Saturday night kicked off the campaign trail for two Stormwind City Council Seats with the race’s first candidate forum. Six would-be councilors spoke of their platforms and answered questions from both moderators and audience. Amongst the candidates were Hannah Wells, a former priest of Stratholme and newcomer to the city; Wilhelm Stark, commander of the private military contracting organization, the Obsidian Sun Company; Lasciell Ravenwood, a noble hailing from Darrowshire with eyes on arcane-renovation; Kelladis Ourano, captain of the Siren’s Song and Xaxdorei representative; and Lioron Picard, High Phoenix of the Phoenix Odyssey. 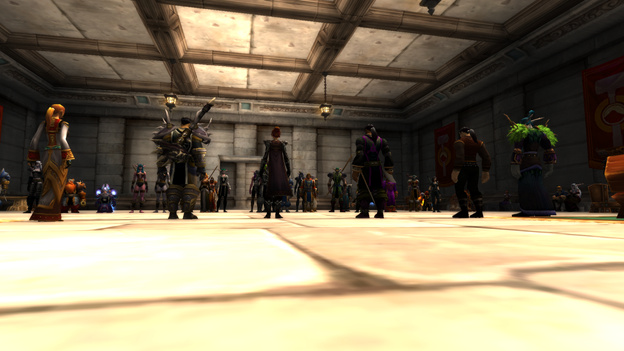 Several issues were posed to the candidates, ranging from their stance on the recently strained relations with Silvermoon to the burgeoning crime rate within the city. Questions were posed from the moderators, Hayli Dawnguard and Salem Dizzlespark, with some posed to individual candidates and others open to the entire forum.

Wilhelm Stark took to highlighting his reason for running for the Old Town seat, saying that “[p]art of the problem we’re facing right now is that the City Council has not provided us with a real opportunity to help them…” Newcomer Hannah Wells echoed the sentiment in turn, saying she would “like to see the City Council given true legitimacy.” As concerns about the validity of the last round of elections are becoming heated talking points around the city, it is no wonder why the candidates made their stance on this issue known. Xaxdorei representative Kelladis Ourano had this to say on the allegations of his organization’s interference:

“All campaign management and fundraising are supported, but not managed by the Xaxdorei. I was not here for the last election, but I can assure you that we intend to let democracy run its due course in this election.”

Public reaction to the forum was shaky, with many claiming the questions posed were biased in favor of particular candidates. A success nonetheless, the five candidates found their voice amongst the people watching. Small groups broke out afterwards in informal campaigning and planning for future events. If you’d like to know more about each candidate, we will be running pieces on their platforms in the coming weeks, so keep an eye out. As this election cycle comes to a heated head, remember to look to the Grobbulus Times as your number one source of news.